Classic vs Advanced Networking in the Melbourne Research Cloud

Instructions for creating your own private network

By default, all projects get access to three networks:

Associating an instance with qh2-uom (or Classic Provider) is required if you plan to offer a service such as a website which needs to be accessed from everywhere. It can also be convenient for logging into your instance while away from campus, without needing to use the VPN.

However, instances exposed to the public internet in this way will be subject to immediate and unrelenting attack by botnets and hackers. Our default configuration for your virtual machines (eg no password logins) follows industry best practices and can be considered quite secure; however, once you start customising the configuration or exposing more services, this can weaken the security considerably.

Each year we have several security incidents resulting from our users exposing insecure services to the public internet. This is always embarrassing and inconvenient for everyone involved. You should only expose a service to the public internet if you have the systems administration skills required to keep it secure and up-to-date.

Using the qh2-uom-internal network only exposes the instance to a private network inside the University of Melbourne. Access to the instance is now only available from on-campus or via the staff or student VPN. This completely eliminates the threats posed by the public internet.

In addition to qh2-uom and qh2-uom-internal, it is also possible to create your own private network, complete with virtual routers and load balancers. For example, you might want to create a cluster where some services are hidden away inside a private network while other services are exposed to the public internet.

Such non-default networking is not automatically granted to new projects. Instead, you need to request Advanced Networking quota. This quota can be requested either for a new project, or for an existing project via Amend/Extend request.

Various types of additional quota are available under Advanced Networking, including load balancers, private networks, virtual routers, and "floating" IPs which can be moved from one instance to another:

By default, when you launch an instance, it is automatically assigned an IP address. When the instance is deleted, you lose that IP address. At this point, the IP address gets recycled back into a pool of IP addresses available for any MRC project to claim. These default IP addresses are called Fixed.

The primary use of floating IP addresses is if you need to access a third-party site which only permits access based on a whitelist.

If your goal is simply to provide a consistent way to reach your instances, it is better to use DNS instead of floating IP addresses. DNS records for your project are now easy to manage through the MRC dashboard.

Many networked devices we're familiar with in day-to-day life are not directly connected to the internet. For example, whenever you're using wifi, you first connect to the wifi router, and then the router mediates your connection to the rest of the internet.

When you are relying on a router to mediate your internet access this way, you are using a private network. Devices behind the same router can often see each other, but the external internet doesn't see anything except the router.

This has several benefits. It is convenient because you don't have to worry about setting up a separate internet connection for every device, everything can just be delegated to the router. It is secure because by default your devices can't be attacked by the myriad threats on the public internet; the external internet only sees what the router exposes.

Networks are partitioned into one or more sets of IP addresses referred to as subnets. When defining a private network, you must also define a subnet to specify the range of IP addresses you want available in the network.

You might have multiple subnets if you have a complicated setup where some of your machines should not have direct access to other machines on the same network. Most of the time when you create a private network on the MRC, it will just have one subnet.

Subnets are specified using CIDR notation, which combines an IP address with a number of significant bits. It is outside the scope of this documentation to fully describe CIDR notation; instead, we will make a small number of suggestions, and refer you to Wikipedia for more details.

A larger subnet isn't necessarily better. If you only have quota for a small number of instances, a large subnet will simply result in more scattered IP addresses. For most research cloud projects, you will probably realise that a /24 or even /27 network will be more to your tastes.

Classic vs Advanced Networking in the Melbourne Research Cloud

By default, compute instances are assigned a fixed IP address and are connected directly to the internet via a public network located at the instance’s availability zone. 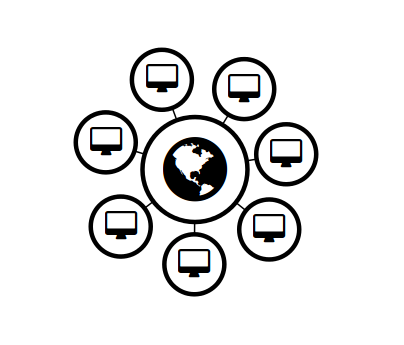 If you have Advanced Networking quota, you can create your compute instances in a private network with a virtual router. The router is connected to the internet via a public IP address. Internet traffic can flow from the private network through the router to the public internet. 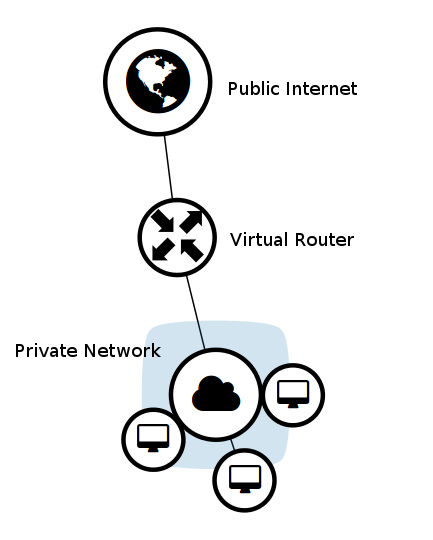 If your project requires advanced networking, please go to the Allocations -> My Requests tab in the dashboard and open an Amend/Extend allocation request. Look for the "Advanced Networking" section and fill it in.

You can confirm your quota in the Project -> Overview section of the Dashboard; it might look a bit like this: 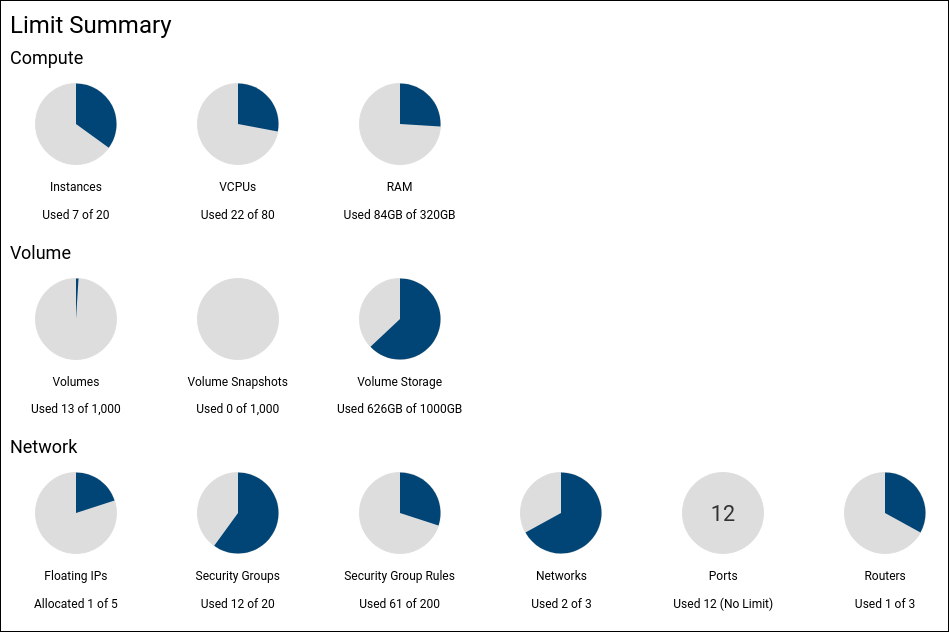 You can refer to the Network -> Network Topology tab for a visual representation of your research cloud networks.

Note that it is not a good idea to mix Classic Networking and Advanced Networking when creating new instances. The instance will end up with two default routes, which breaks communication with the instance.

Instructions for creating your own private network

Set up the network itself

Once you have been approved with Advanced Networking quota, you can work through this example about how to start using it in your project.

First, select the desired project from the Nectar dashboard and navigate to the Network -> Networks tab: 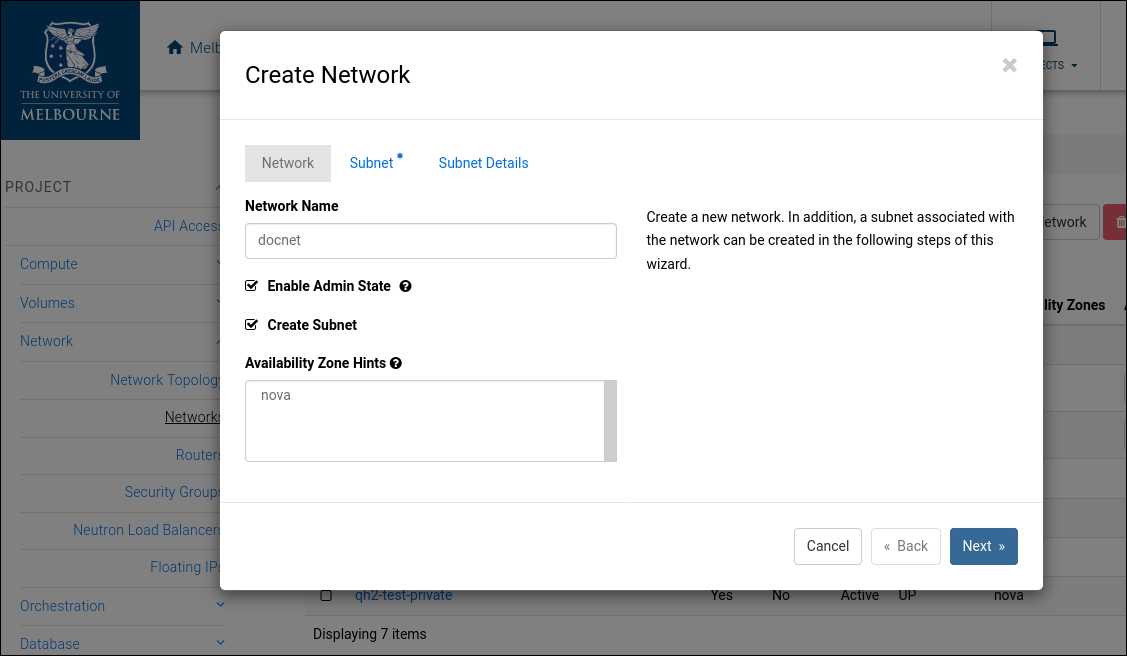 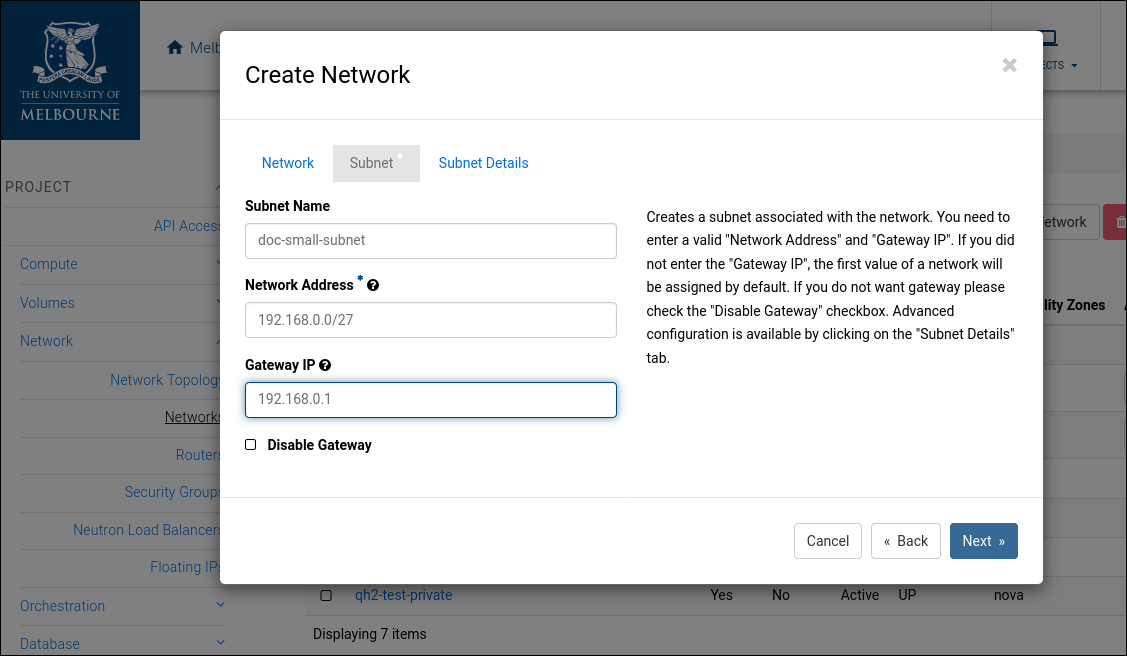 Give the subnet a name and an IP address range in CIDR notation, as described above.

You can leave the gateway IP address field blank and it will be automatically set as the first IP address in the range. For example, if you specify 192.168.0.0/27 in the previous field, the gateway will default to 192.168.0.1.

If you disable the gateway, the next tab Subnet Details will not be available. In this case, the instance operating system will also not have a default route set.

The entries in the Subnet Details tab can usually be left at the default values. Click Create to instantiate your new network.

Usually when you create a private network, you should also create a router for it. There are several reasons for this:

Navigate to the Network -> Routers tab:

Click the Create Router button. In the Create Router dialog, enter the name of your router. Select melbourne as the external network. This will attach a publicly routed IP (not to be confused with Floating IP) to your router and allow outbound communication from any instance that joins your gateway-enabled private subnets. 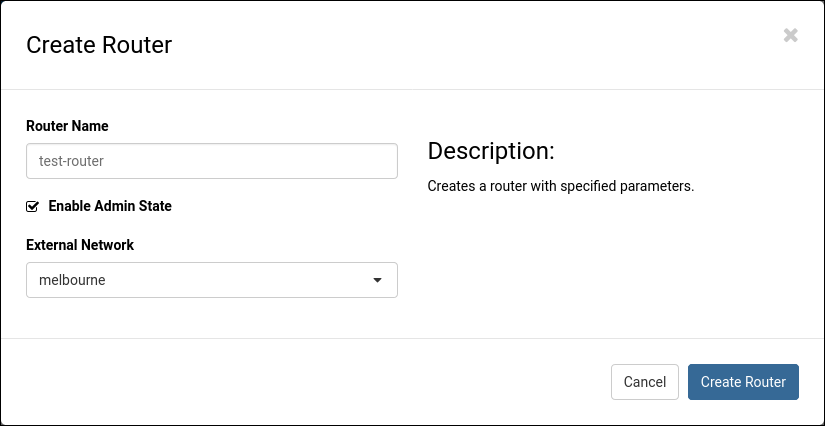 When you are ready, click the Create Router button.

Associate the router with a network

Once the router has been created you must attach it to the private network of choice. Make sure you are on the Routers tab, then click on the router you just created:

Then select the Interfaces tab and click Add Interface.

From the Add Interface dialog, select the Subnet you created earlier from the drop down box. If you specified a Gateway IP address earlier when creating the subnet, the router should also be given that same IP address here. Once completed, click Submit. 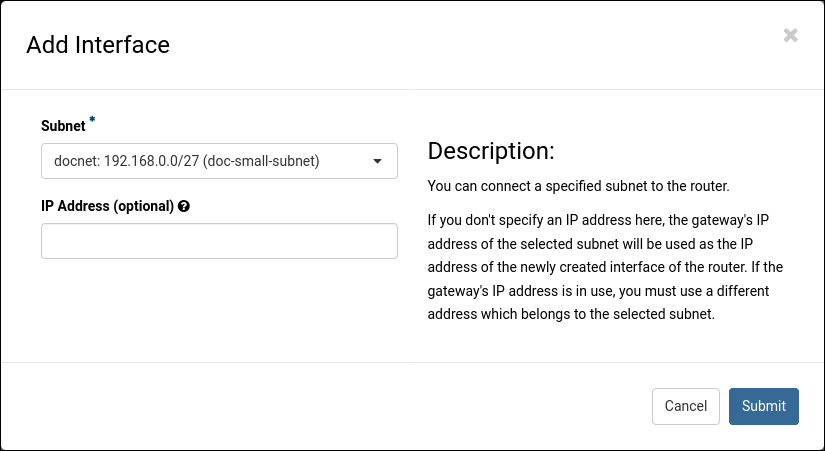 Your private network is now ready for use by compute instances.

Adding a new instance to the network

From within the Launch Instance window in the dashboard select the Networking tab. Add your private network to Allocated Networks using the ↑ button. We will remove the Classic Provider network in this example as we intend to use floating IPs for inbound communications. 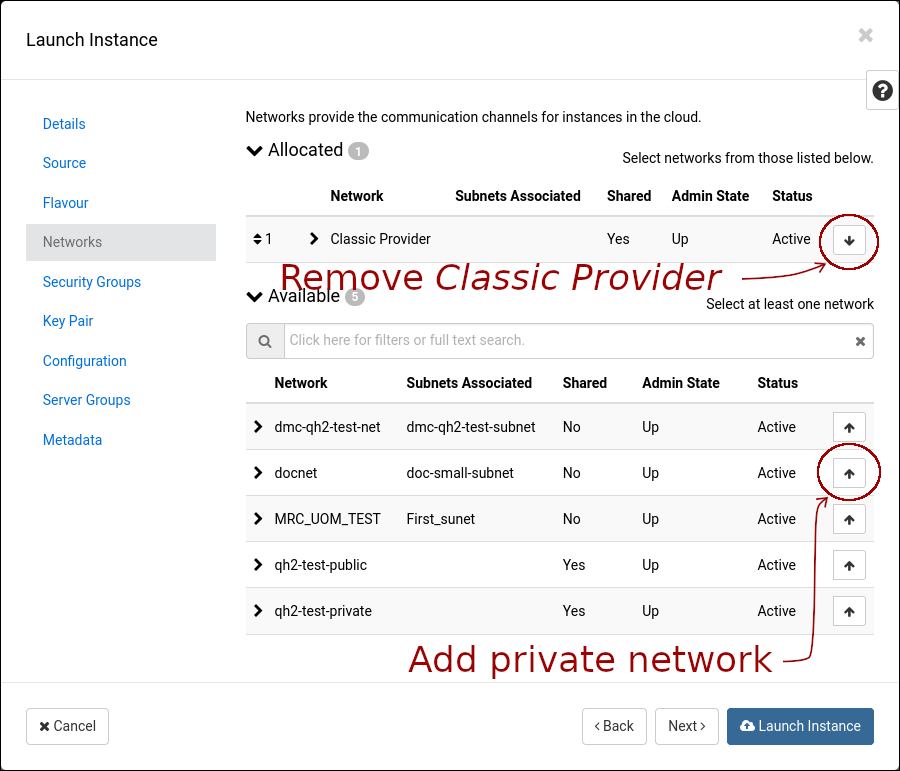 Attaching a floating IP to an instance

In order for a floating IP to be attached to your instance, your instance needs to be part of a private network which contains a gateway-enabled subnet. This includes the presence of a virtual router so that traffic can egress to the external internet.

From the Compute -> Instances tab, find the instance from the previous step, and use the actions menu to click Associate Floating IP.

Verify the floating IP is now present in the Dashboard; you may need to refresh the page.

Once you are satisfied, you may try logging into your instance via the floating IP address.

It is not usually a good idea, but if you need to, you can attach and detach interfaces on existing virtual machines. These actions can both be performed using the instance's action menu.

Likewise, a floating IP address can be disassociated from an instance from the actions menu.